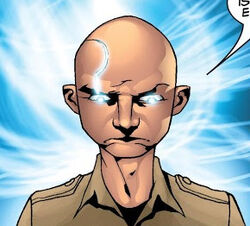 Hair
Bald
Unusual Features
Has a question mark shaped line starting on his right eyebrow and expanding in the right part of his forehead. It lightens in blue when he uses his powers. This line seemed to have widened and it now looks like a black question mark shaped gap on his forehead.
Origin
Origin
Human Mutate
Reality
Earth-616
Creators and Appearances
Creators
Brian Reed, Giuseppe Camuncoli
First Appearance
Ms. Marvel Special #1
(March, 2007)

Gavin is a teenager and the son of two unnamed A.I.M.'s agents.[1] When A.I.M. learned about Scarlet Witch's powers to alter reality and what she did during the House of M, they tried to reproduce her powers to reshape the world to their will. So they experimented on their agents' own kids. Gavin was one of them. According to him they experimented on him during one month, before he somehow escaped. It seems that he's probably the only survivor, since all of the kids who were experimented on, endured rough surgery.[2]

It's unclear how he befriended Rich, but some time after Gavin's escape, when Rich, who then knew about Gavin's power, asked him to broadcast a book written by Carol Danvers, about the time she was Binary, he lost control of his powers, and all the city was taken over in the reality Gavin created, making them face an entity Ms. Marvel fought with when she was Binary. With the help of the latter, he learned how to use his power without the need of a book, and things soon returned to normal. When A.I.M.'s agents suddenly appeared and tried to take him, he used his powers and make them appeared in jail. Learning about his story, Ms. Marvel offered to help him but using his powers, he escaped, thanking her for having learned him how to use his powers.

Later, he abducted Rich because he wanted him to play with him in realities that he created. After destroying an A.I.M.'s cell, Ms. Marvel learned where Gavin was and she took off to warn him that A.I.M. knew about his location. She arrived when Gavin was forcing Rich to play a real pirates game. She makes him stop the game and warns him about A.I.M. Sensing her will to become a greater superhero and her lack of self-esteem, against her will, he created a city where she was the most popular superhero again, like in the House of M. He then tries to attack Ms. Marvel with alter egos of superheroes that he created himself, stating that to be the greatest superhero, she needed a foe. But not wanting to play his game, and realizing Rich was there against his will for weeks, she made Gavin stop that. Feeling rejected by both Ms. Marvel and Rich, Gavin made them reappear in New York while he escaped and refused Ms. Marvel's help again. He himself appeared on the Moon, creating oxygen around him. He then wonders what else he could do.

Later, A.I.M. used both his and M.O.D.O.K.'s protocols to create other Storytellers in the form of embryos. Seemingly having at least a part of Gavin's mind, they remembered Carol Danvers' help in the past, and wanting to be rescued from the hands of A.I.M., they recreated her, effectively resurrecting her.[3]

Reality Warping: Gavin has the power to make anything he imagined into reality. The extent of this power is unknown, even to himself, but he stated that he can't change the world yet. Changing the reality of an island though isn't a problem for him.[1]

Like this? Let us know!
Retrieved from "https://marvel.fandom.com/wiki/Storyteller_(Gavin)_(Earth-616)?oldid=5703667"
Community content is available under CC-BY-SA unless otherwise noted.