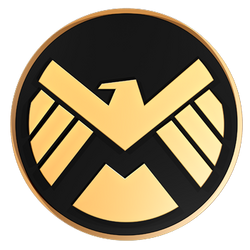 Founded to combat technologically advanced threats on world security, S.H.I.E.L.D. had remained on the front lines fighting terrorism and extraterrestrial menaces as an international intelligence agency.[1]

One day, a mysterious Pulse hit Earth, a phenomenon which affected technology worldwide, left strange energy signatures, and traces of an unknown material. Director Nick Fury ordered one of S.H.I.E.L.D.'s newest agents to form a team along Iron Man to rescue Black Widow from A.I.M., Stark later helped to re-establish the connections of the Helicarrier and its flight deck after the Pulse.

After facing Hydra forces, led by Viper and Baron Zemo, Captain America, along with Tony Stark, Nick Fury, Maria Hill, Thor, and Mr. Fantastic to collect all the things they know about the Pulse and the enemies they faced.

After the reunion they arrived to the conclusion that the Pulse was a charged cloud of an "Isotope-8", a kind of compound capable of multiplying people's powers, that crashed into the Earth, leaving all this energy lost in the planet and that was what their enemies were looking for. The heroes realized they could use this Iso-8 for good, boosting agents' and heroes' abilities against the new enhanced villains.

Finally, Nick Fury told the Agent to make a team with the most powerful superheroes in the Earth to collect all the Iso-8 before villains could get their hands on it, for that, the supervillains made their own alliance a Syndicate led by Doctor Doom.[1]

After the Syndicate was revealed to be a façade for Doom's true plans, the Alliance had to face a new threat, the mysterious arrivals of alternate versions of numerous heroes and Agents from other universes in the events called Incursions.[1]

Like this? Let us know!
Retrieved from "https://marvel.fandom.com/wiki/Strategic_Homeland_Intervention,_Enforcement_and_Logistics_Division_(Earth-12131)?oldid=6521301"
Community content is available under CC-BY-SA unless otherwise noted.