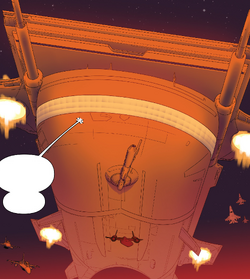 The world's peace keeping organization known as S.H.I.E.L.D. was under the command of Director Maria Hill when they went to investigate the destruction of Newberry, South Carolina.

Director Hill picked up only one life sign from the catastrophe, so she had a land drone with a built in holographic communication device to interact with the individual. After learning that his name what Matthew Malloy, he asked her if she was a robot but Hill reassured him that she was communicating with him at a remote sight for safety reasons.

When asked if he was a mutant, Malloy freaked out and unleashed a devastating energy blast which killed every member of the S.H.I.E.L.D. containment team sent in to restrain him.[1]

Hill called upon the services of Psi-Division agent Exodus and his associate Headlok to telepathically communicate in order to reason with him.

But the backlash from Matthew's uncontrollable power caused both men to suffer from nose bleeds and possible brain aneurysms. After this she contacted the X-Men.[2]

When they arrived to the Helicarrier, Hill had Rachel Grey contact Matthew also by using illusions of Professor X and most of Earth's mightiest heroes to get him to stand down but Rachel's charade only lasted so long.

Malloy was able to break through the mirage to realize the X-Men were behind it, but he did not blame them, so when he destroyed the Helicarrier he teleported them away while Maria and her agents were engulfed in telekinetic bubbles for protection.[3]

As a last minute option, Maria had another Helicarrier do a surprise attack on Matthew with every weapon available but as they fired, Cyclops and Magik got caught in the crossfire which killed them instantaneously, while Matthew was able to resurrect himself.[4]

Retrieved from "https://marvel.fandom.com/wiki/Strategic_Homeland_Intervention,_Enforcement_and_Logistics_Division_(Earth-14923)?oldid=4984271"
Community content is available under CC-BY-SA unless otherwise noted.