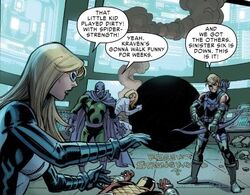 After the defeat of the Avengers by the hands of Regent,[1] former Avengers Hawkeye and Mockingbird created S.H.I.E.L.D. as a resistance against Regent's regime.

When the Regent ordered a compulsory screening at Annie Parker's school, Mockingbird and Prowler abducted her and her mother and introduced them to their organization.[2]

Dr. Johnathan Ohnn managed to reverse-engineer Annie's inhibitor bracelet, and he created an arrow-head which could neutralize the Regent's powers, but still needed a DNA sample from him; however, the resistance's base was invaded by the Sinister Six after the Regent read Sandman's mind to learn of its location.

While S.H.I.E.L.D. used one of Ohnn's portals to escape, Annie jumped into action, helping to hold back the villains. Another portal was opened, which had been sewn into Sandman. Marko activated it to let S.H.I.E.L.D. get into the Regent's stronghold. Hawkeye, Mockingbird, and Prowler entered it, and they were soon followed by MJ and Annie.[3]

While S.H.I.E.L.D. tried and failed to neutralize the Regent, Annie decided to help her father, and she struck the villain with an arrow-head obtained from Hawkeye; however, even with his powers neutralized, the Regent was still a threat. Peter, Annie, and MJ teamed up to beat him up, but the Regent got hold of Annie. Peter bluffed his way next to the Regent, and made a joke that caused the villain to laugh and be distracted for long enough so Peter could strike a finishing blow that knocked him out. S.H.I.E.L.D. proceeded to take the Regent into custody using an improvised restraining unit created by the Prowler.[4]

Retrieved from "https://marvel.fandom.com/wiki/Strategic_Homeland_Intervention,_Enforcement_and_Logistics_Division_(Earth-18119)?oldid=5551442"
Community content is available under CC-BY-SA unless otherwise noted.