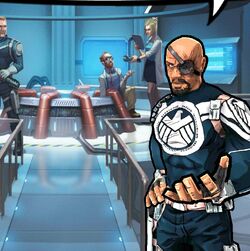 A group of rogue S.H.I.E.L.D. agents were able to frame Director Nick Fury for the murder of an alternate version of Spider-Man. After being taken into custody, he escaped and created the Secret Warriors. Together, they weeded out the traitors, allowing Fury to retake the mantle of S.H.I.E.L.D..

When the Sinister Six created a portal that allowed them to enter Earth-TRN461, S.H.I.E.L.D. was able to utilize the portal to create a team of Spider-Men from across the Multiverse to stop them.

After the implementation of the Superhuman Registration Act, Spider-Man II convinced Fury to register with him. Fury sent agents to apprehend anti-SRA heroes, the Secret Avengers, but the snipers shot Agent Venom. Almost having caused the death of the hero, Nick stopped pursuing the Secret Avengers.

After Spider-Man disobeyed Fury's order to disband the Spider-Force, he assembled a squad a S.H.I.E.L.D. agents to force them to disband and leave Klyntar.[1]

Like this? Let us know!
Retrieved from "https://marvel.fandom.com/wiki/Strategic_Homeland_Intervention,_Enforcement_and_Logistics_Division_(Earth-TRN461)?oldid=6441335"
Community content is available under CC-BY-SA unless otherwise noted.