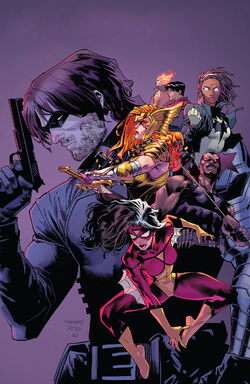 After the Vridai released some deadly viruses in the USAMRIID Research Compound, they brought Spider-Woman, Spectrum, Winter Soldier, Angela, and Wiccan to the facility so they would be blamed once the Avengers arrived. Blade, who had come across the Vridai in the past, knew they were innocent and decided to help them defeat the actual criminals. Arriving at the Temple of the Three, they fought their way through the Vridai before coming across their leaders, Count Ophidian and Legie Knight Birgit.[1]

After tracking the Vridai across the world, they discovered the Count Ophidian they had encountered wasn't, in fact, the real one, as he had been held prisoner by Birgit all this time.[2] Scared of his "new captors", Count Ophidian revealed that the Vridai had lost their home after the War of the Realms and they had nowhere to go, so the team agreed to help "another wandering soul".[3]

Their next stop was Monster Island, where they established a temporary base with Deadpool's consent. After a while there, Spider-Woman, Blade and Winter Soldier found themselves having to fight each other in a bar fight, and after Jess won, she was offered a job offer by Don Buggini to go pro. She didn't put much thought into it, but kept Don Buggini's business card.[4]

When leaving the bar, they were ambushed by Birgit, leading Count Ophidian to be kidnapped again. They followed Birgit to Svartalfheim and managed to return safely to Monster Island alongside Ophidian, but it still wasn't safe for him. Thinking back to her job offer, Jessica called for a ring fight where the team had to confront countless monsters and even each other. The team were ignorant of Jess's plan and were growing impatient after taking on so many opponents, but after a long battle, Spider-Woman managed to knock everyone out and revealed herself to actually be Count Ophidian in disguise, was then declared the winner and offered a job and residence in the Island.[5]

After having a celebratory dinner, the team briefed the Avengers on everything that happened the past few weeks and parted aways.[6]

Retrieved from "https://marvel.fandom.com/wiki/Strikeforce_(Earth-616)?oldid=5646110"
Community content is available under CC-BY-SA unless otherwise noted.