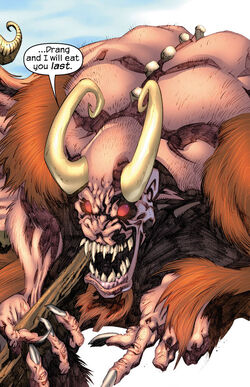 Strum and his brother Drang were the first Storm Giants, fruits of the mating of the Fenris Wolf with the Fire Giant Surtur.[1] They lived peacefully in the land that would become known as Asgard. One day, the Aesir led by Woden came to them. Woden asked them the authorization to build a city on that land and offer them tribute, but threatening with war in the opposite case. The Storm Giants gladly welcomed the Aesir.[1]

The city was built, but more and more Gods came. While Odin was busy with other affairs, the new generation of Aesir wished to expand their land, and chased the Giants away. Odin preferred to let the persecution go on, thus solidifying his power over his Aesir. With no help from their parents, the Giants took refuge in unwelcoming territories, where their offsprings grew as fierce monstrosities.[1]

After Odin died, Sturm and Drang returned to Asgard and claimed their land back. Captain Marvel (Genis-Vell), using his cosmic awareness, showed Thor the truth, and Thor therefore offered the Giants to give them back land on Asgard. Way too eager on vengeance, Drang was ultimately executed by Marvel.[1]

Like this? Let us know!
Retrieved from "https://marvel.fandom.com/wiki/Sturm_(Earth-616)?oldid=5608210"
Community content is available under CC-BY-SA unless otherwise noted.