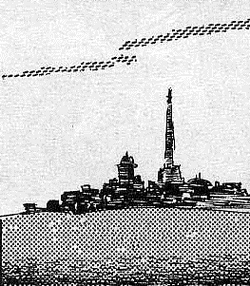 Stygia was an ancient land of sorcery and serpent worship, located in the Southern Kingdoms between Shem and the Black Kingdoms on the world-continent of Hyboria. It was a theocracy and openly xenophobic. The ancestors of the Stygians conquered the land after driving out an ancient "Elder Race," probably the Serpent-Men. They consequently inherited pre-human monuments, such as the black pyramids and the religious worship of Set.[1]

At the end of the Hyborian Age, a cataclysm cause the formation of the Mediterranean Sea along the former westward path of the Nilus, as the Stygian continent broke away from the rest of world-continent of Hyboria and would later become the eastern part of Africa.[3]

Stygian royalty and certain lines of ancient nobility were typically relatively tall people with fair-skinned and black hair. The rest of the nobility and the influential middle class are typically dusky-skinned and hawk-faced. The lower classes and the slaves typically have mixed ancestry, resulting from mating among Stygians themselves, Kushites, Shemites, and Hyborians.

Stygia was underpopulated due to its climatic conditions. The only fertile lands were those surrounding the River Styx, also known as the Nilus, while the rest of Stygia was an arid desert. Rumors of the Hyborian Age surmised that this was a side-effect of the Stygians practice of dark magic.[1]

The coastal city of Khemi served as its main harbour and religious center. It lacked the cosmopolitan culture of other major ports of the Hyborian world, mainly due to the restrictions imposed on foreign visitors. Only foreign ambassadors and licensed traders were allowed within the city. Foreign scholars and sorcerers tended to migrate to more hospitable Stygian cities.[1]

The city of Luxur served as the royal seat of power and center of administration. It aws strategically situated among major trade routes. Kheshatta, the famed City of Magicians, serves as another seat of power.

Stygia maintained a moderately-sized war fleet and a much larger land army. While this army had a well-deserved reputation for ruthlessness and discipline, it was hindered by the government's reluctance to upgrade their weaponry. Adhering to ancient tradition, they used the same type of armor and weaponry which their predecessors had used centuries before. Weapons that were considerably outdated in comparison to other Hyborian equipment.

Stygia was relatively secure from foreign invasion. The Eastern Desert and the steppes kept them safe from would-be eastern invaders, while their western border was the Western Ocean. The Black Kingdoms and Shem also served as buffer zones, separating them from more aggressive potential opponents, but the Stygian government remained insecure and near-paranoid in its fear of foreign invasion.[1]

In a shadowy shop of Stygia's main bazaar, Thor and Conan were told that Mjolnir, the mystic hammer made of wondrous Uru metal, could have been found by Thoth-Amon in the city of magicians.[4]

Like this? Let us know!
Retrieved from "https://marvel.fandom.com/wiki/Stygia_(Hyboria)?oldid=6547446"
Community content is available under CC-BY-SA unless otherwise noted.