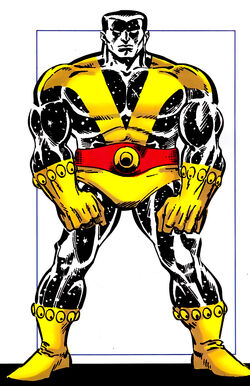 The Stygian race was part of the Shi'ar Empire. The most prominent Stygians include Glakandar, who became the first being in this universe appointed by Eon to be the defender of the universe many centuries ago.[1]

In modern times there have been three Stygians who represented their homeworld as part of the Shi'ar Imperial Guard: The first was Neutron[2] a long standing member for years who was killed during the War of Kings conflict.[3] Another later recruit was Cosmo,[4] who was slain by the mutant Vulcan during his rampage during the Shi'ar empire.[5] Following the death of Neutron he was recently replaced by a successor who took his name.[3]

The Stygians of Earth-5106 are uniquely different than most other similarly named alien races in the multiverse. These aliens are green skinned and reptilian in nature. They live on the planet Stygia which appears to be relatively close to the Sol system in this universe. In the year 1953, they used a magnetic device to hurl a giant planetary mass at the planet Earth for the purposes of destroying it. Shortly thereafter they captured Earth rocket test pilot John Dixon and told him of their plan, which would reach fruition in about 2 and a half years. Dixon convinced the Stagyians to let him go and he developed a nuclear weapon strong enough to destroy the planetary mass in February of 1955. The resulting destruction caused a chunk of the planetoid to hurtle back to Stygia causing an extinction level catastrophe that wiped out the entire Stygian race.[6]

Like this? Let us know!
Retrieved from "https://marvel.fandom.com/wiki/Stygians_(Aliens)?oldid=6077932"
Community content is available under CC-BY-SA unless otherwise noted.