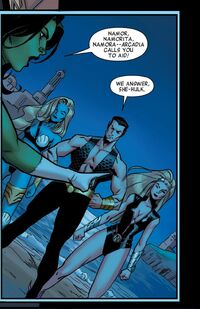 Base of Operations
Waters around Arcadia
Affiliations

The Sub-Mariners are a trio of Atlanteans that live in the waters around Arcadia. They were asked by A-Force to investigate Arcadia's waters to determine the origin of a megalodon in Arcadia that suddenly appeared earlier.[1]

The Sub-Mariners eventually stumble upon a portal the megalodon used to enter Arcadia.[2] It was later discovered that Loki of A-Force was responsible for opening the portal as well others in a scheme to become Arcadia's new baroness. After being defeated by A-Force, Loki vengefully opened a hole in the Shield to unleash zombies from the Deadlands upon Arcadia.[3] Namor and Namorita are later seen helping A-Force and other heroes fend off the zombie invasion.[4]

Retrieved from "https://marvel.fandom.com/wiki/Sub-Mariners_(Earth-16191)?oldid=3723980"
Community content is available under CC-BY-SA unless otherwise noted.