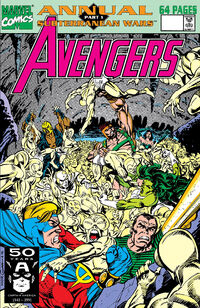 After the priest-lords' regime had fallen and Warlord Kro had disappeared, a civil war erupted in Deviant Lemuria. The Deviant Brutus emerged victorious and assumed control of the Deviants. He aimed to reclaim all that used to belong to the Deviants, including all of Subterranea and the technology that they left behind. Leading an army of Deviant Mutates which he brutalized, he began a war against the other Subterranean factions.[1]

The subterranean war spilled onto the streets of NY city. The Avengers were forced to intervene in the battle that raged between the Deviants on one side and the Moloids, Tyrannoids, and Lava Men on the other. They managed to drive the combatants back underground. Pursuing them underground, the Avengers encountered the Mole Man, Grotesk, and Tyrannus who revealed that their followers had not been invading the surface world. They were actually fleeing the Deviants, who had been attacking the other subterranean groups. Soon the Avengers found themselves besieged by the Deviants led by Brutus and were taken captive.[1]

An ancient-looking Queen Kala appeared outside Stark's building. She begged Iron Man to help the Mole Man and the Subterraneans who were being attacked by the Deviants. They were then attacked by Subterranea's Outcasts, who captured Kala and took her underground. Iron Man followed them underground, while Kala convinced her captors to take a detour to Netherworld. Where the Netherworlders confront the group as Kala had been exiled on penalty of death. Iron Man arrived in time to save them, while two of the Outcasts (Digger and Landslide) damaged the city while defending themselves from the Netherworlders. Through Kala was de-aged by the Netherworld atmosphere, she decided to return to the surface as the Mole Man needed her help.[3]

The Deviants launched a final assault on their Subterranean rivals and prepared a weapon of mass destruction, the Oscillatron, which would destroy the other Subterranean realms and shatter the surface world. Iron Man took both the West Coast Avengers and the Great Lakes Avengers underground. They fought the Deviants, freeing the East Coast Avengers. During the fighting, Sersi discovered that Brutus was in fact a Deviant Mutate who had managed to pass as a normal Deviant. The regular Deviants abandoned him, after which the mutates who had been brutalized by Brutus tore him apart. While the Avengers were celebrating their victory, Grotesk prepared to use the Oscillatron to destroy the world. He then activated the weapon but the Living Lightning had absorbed so much energy from the machine, that nothing happened. After which Grotesk fell under the Avengers' attacks.[4]

"Subterranean Wars" was a five-part storyline running through Marvel's 1991 Annuals. The story took place entirely through Annuals with a cover date of June, 1991.

The other Annual storylines for 1991 were The Von Strucker Gambit, Korvac Quest, Kings of Pain, and Vibranium Vendetta.