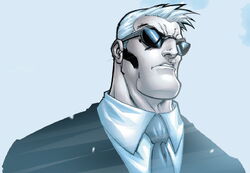 In Pre-Cataclysmic Age the distant past, a species of self-replicating silicon-based extraterrestrial robotic spiders arrived on Earth with the mission to exterminate all life on Earth with a cataclysmic event that was immortalized in many cultures as the Great Flood. Learning they were being manipulated by the entity who had commissioned them to do so, the majority of the spiders abandoned the plan and returned into space; although one colony of spider-robots was stranded on Earth and continued to plan for humanity's destruction by infiltrating the highest echelons of the Earth's militaries and governments, founding the Ararat Corporation, and creating a clone of the Venom symbiote to exterminate all life on Earth and prepare it for recolonization.[1]

While in deep space Reed Richards encountered a member of the benevolent sect of spider-robots, which he brought to Earth and communicated with. Replicating into a colony, the spider-robot helped him develop an advanced containment system for the Venom symbiote and study the creature for the purpose of figuring out how to destroy it.[2] When Nick Fury arrived to take the symbiote and its host Eddie Brock into custody, one of the spider-robots latched onto Fury and communicated with him through his cell-phone, warning him of the imminent threat to humanity. Some time between this and Eddie and the symbiote's inevitable escape, the nanorobotic spiders allied with Nick Fury constructed an artificial body in the form of a white-haired eyeless human man in a black suit, to which Nick Fury added his sunglasses.[3] The Suit was dispatched to the Canadian Arctic to exterminate the symbiote clone created by the Ararat Corporation, but encountered interference from a crew of American soldiers stationed at the Christmastown radar station. Temporarily dismembered by the symbiote,[4] the Suit reconstituted himself and sabotaged the base's vehicles in order to prevent the symbiote's escape.[5]

Taking Patricia Robertson, the sole survivor of the base, captive in order to use her to trap the symbiote,[6] the Suit followed it to the town of Voici in the Northwest Territories, Canada, where it was engaged in combat with Wolverine. Realizing the symbiote would be unstoppable if it took Wolverine as a host, the Suit tried to kill Logan with an electrical discharge, implanting his phone in Wolverine's chest to set a trap. Frankie and Vic, clone agents of the Ararat Corporation, intervened in an attempt to get the symbiote to bond to one of them, having been outfitted with cybernetic collars that would enable them to control it.

After Vic and Frankie nuked Voici, the Suit ambushed and killed Vic, taking her control harness and attaching it to Robertson. Torn to pieces by the symbiote-controlled Wolverine, the Suit had Robertson activate a second phone he had constructed, causing the one implanted into Wolverine's chest to explode. Following this, Robertson bonded to the symbiote and decided to travel to New York to kill Venom, dismembering the Suit so that he couldn't stop her.[7]

The Suit reconstructed himself and arrived in New York in time to stop Patricia from unwittingly fulfilling the Ararat Corporation's goal of having the Venom symbiote assimilate its clone.[8] As Robertson slowly lost control of the symbiote, the Suit led her away from potential hosts and explained its presence on Earth and the Ararat Corporation's plot. They were confronted by a Vic clone who had taken up Frankie's identity and defected from the Ararat Corporation upon discovering Bob's deception. Frankie helped the Suit repair the control collar, informing him of the full extent of Bob's plans. The Suit contacted Reed Richards with a plan to lure Venom into a trap and kill him once and for all,[9] but the plan was foiled by the intervention of Spider-Man, who refused to let the Fantastic Four kill his longtime enemy; and Bob, who impersonated the Suit and tricked Robertson into going after Venom. The Suit prepared to kill both Spider-Man and Venom, but Susan Storm contained the blast in a force field, incinerating him, while Bob deactivated the collar and enabled the symbiote clone to be assimilated by the original.[10]

The Suit was taciturn and serious, only making a single unsuccessful attempt at a joke when attacking Venom.[11]

The robotic spiders comprising the Suit were capable of reconstructing his body after it was severely damaged, as well as rapidly constructing, modifying, and enhancing most forms of technology. He was capable of generating and emitting enormous quantities of electrical energy, using a cellphone-like device as a conduit.

The Suit used a cellphone-like device as a conduit for his electrokinetic abilities, and was capable of discharging enough energy to vaporize a person.

Like this? Let us know!
Retrieved from "https://marvel.fandom.com/wiki/Suit_(Earth-616)?oldid=5049354"
Community content is available under CC-BY-SA unless otherwise noted.