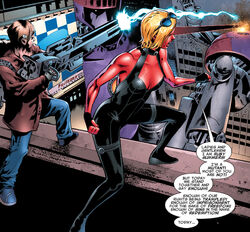 When Layla Miller visited this future, she inspired an elderly and bitter Cyclops to once again fight for mutant rights. Together with his daughter Ruby Summers they started a rebellion against the humans oppressing mutants and began recruiting more mutants to their ranks.

Like this? Let us know!
Retrieved from "https://marvel.fandom.com/wiki/Summers_Rebellion_(Earth-1191)?oldid=6463303"
Community content is available under CC-BY-SA unless otherwise noted.