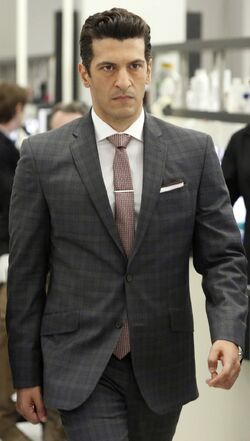 Are you ready to comply?

Sunil Bakshi was a Hydra agent working for Dr. Daniel Whitehall. He ordered Carl Creel, one of Hydra's superpowered assassins, to recover a device known as "the Obelisk" that the SSR took from Hydra at the end of World War II. Once Creel had retrieved the device, Bakshi informed Dr. Whitehall of Creel's success.[2]

Recognizing that S.H.I.E.L.D. was in pursuit of Creel, Bakshi chose not to rendezvous with him at the diner where he would retrieve the Obelisk. Later that night, Bakshi contacted the frustrated Creel with the new location where he would hand the device over to him. They met the next day, but Creel refused to hand the Obelisk over until Bakshi helped him get the infection from coming into contact with the Obelisk under control. Bakshi told Creel to remember his training, and how he was happy to comply with Hydra's orders. Before Creel could hand it over, the two of them were ambushed by Lance Hunter, a mercenary working for S.H.I.E.L.D. who wanted to avenge Izzy Hartley's death at Creel's hands. During the resulting commotion, Bakshi ran away, forcing him to return empty-handed.[3]

While on the hunt for Donnie Gill, Bakshi turned his attention to Jemma Simmons, one of the scientists studying Gill's cells. In reality, Simmons was an undercover S.H.I.E.L.D. infiltrating the organization for S.H.I.E.L.D.'s new director Phil Coulson. Bakshi interrogated Simmons, demanding why she "lied" to Hydra for not disclosing her previous relationship with Donnie, but Simmons assured him she did not know whose cells she was studying and that she was loyal to Hydra. Bakshi tested Simmons' loyalty when they tracked Gill to a boat in the port of Casablanca by having her confront him alone. Gill had a record of killing any Hydra agents sent after him, so Bakshi hoped to use their history together to keep Donnie from attacking them. Although Simmons was able to make contact with Gill, they were interrupted by a team of S.H.I.E.L.D. agents also after him. Donnie realized what was really going on and attacked Simmons, who ran back to Bakshi and a team of heavily-armed Hydra agents. Donnie followed her to them, but Bakshi stepped out in front of them and was able to reactivate Donnie as a brainwashed operative for Hydra using the same phrase he used to get Creel to regain control of her powers. Bakshi then ordered Donnie to use his freezing abilities to ice the boat and kill the S.H.I.E.L.D. agents aboard, but a S.H.I.E.L.D. sniper took out Donnie before he could hurt anyone. Although they lost their target, Bakshi told Doctor Whitehall that he believed it was time for him to meet Simmons in person.[4]

When the a 500-year-old painting was found to have the runes from the Obelisk on its back, Bakshi attended a fundraiser posing as Brigadier General Glenn Talbot to claim the painting for the U.S. government. However, S.H.I.E.L.D. agents Coulson and Melinda May were also there trying to take the painting. Coulson noticed Talbot's attendance, and begged him not to blow his cover. Bakshi agreed, but soon pointed the two agents out to security guards. While Coulson and May were escaping the event, Bakshi as Talbot confronted them and offered Coulson a chance to study the runes at a government facility. Coulson agreed, but requested an hour to give prepare. May went back to the hotel room he told them to meet him at, but attacked him and Agent 33 after she discovered their connections to Hydra. During the fight, Bakshi's disguise was damaged, revealing his identity to May, but Agent 33 was able to use her surprise against her and took her out from behind. Bakshi then had Agent 33 pose as May and infiltrate S.H.I.E.L.D. while he stayed behind and to get any information out of May as he could. However, when Agent 33 returned with Coulson, he realized she was an impostor and attacked her. The commotion outside his hotel room distracted Bakshi, giving May the opportunity to escape. Bakshi tried to escape with the painting, but Coulson took him out with his I.C.E.R. as he was calling in an extraction team.[1]

Simmons' cover as a was blown when Raina sent an image of her sending information to S.H.I.E.L.D. to every Hydra agent's email account. However, she was able to escape with the help of Bobbi Morse, another undercover S.H.I.E.L.D. agent posing as Hydra's head of security.[5]

After a team of Hydra operatives disguised as S.H.I.E.L.D. agents attacked the United Nations, Senator Christian Ward received custody of his younger brother Grant, a captive Hydra agent, from Director Coulson in return for exonerating S.H.I.E.L.D. and revealing Hydra as the true assailants. However, Grant was able to easily escape while he was being transferred to his brother.[6] Grant eventually met up with Bakshi in a bar in Boston, where Grant offered him an opportunity to get close to Coulson. Bakshi agreed, but Grant killed Bakshi's men and tied him up, leaving him behind to be found by Coulson's agents. Bakshi was taken back to the Playground, where he was kept in Ward's old cell.[7] Agent Morse was put in charge of interrogating him, and she hoped to exploit Bakshi's determination not to disappoint Dr. Whitehall to extract information from him. When Bakshi described his superior as a "disciple" of the Red Skull, Agent Morse believed he slipped, and started the S.H.I.E.L.D. agents down a trail that led to them discovering Dr. Whitehall was in fact Dr. Werner Reinhardt, a scientist who studied the Obelisk for Hydra back in World War II. Agent Morse hoped to use this new information to get more out of Bakshi, but he instead bit into a cyanide pill hidden in his cheekbone. Bakshi would have died if not for Agent Morse and Lance Hunter immediately taking him to their medical facility, where Bakshi lay comatose.[6]

When Bakshi recovered, S.H.I.E.L.D. told him that they were going to turn him over to Talbot and that Whitehall was dead. Unknown to Bakshi, SHIELD was conducting a sting, attacking Coulson and May's transport and faking their deaths, as Hunter, masquerading as a Hydra agent, takes him to safety. After Bakshi makes contact to Hydra agent Octavian Bloom to inform him that he's alive, Hunter draws a gun on him, claiming to have been hired by one of the high-ranking Hydra members seeking to take Bakshi's place as Whitehall's successor to take him out. Bakshi is able to offer a bribe in exchange for his life. When he arrived at Bloom's residence, Bakshi told Bloom to have the other three competing for Whitehall's position eliminated. However, soon after his rivals were assassinated, Hunter and Morse stormed the mansion and kill Bloom and apprehend Bakshi to turn over to Talbot.[8]

Bakshi was later broken out by Ward and Agent 33, who brainwashed him to serve them.[9] When Ward later made a deal with Coulson to infiltrate Hydra, they used Bakshi to get close to Doctor List, with Mike Peterson posing as his bodyguard. Instructed to act as he would once he met with List, Bakshi offered Peterson to List. List then told Bakshi of how he was tracking occurrences of quantum entanglement across the globe, suspecting that a teleporter was at work. List then sent Bakshi to Milwaukee, Wisconsin to capture the teleporter. Though Bakshi did not succeed in his objective, he managed to capture another superhuman named Lincoln Campbell. [10]

Bakshi took both Peterson and Lincoln to Hydra's Arctic base for List to experiment on. He also acted as Ward's inside man for Coulson's team to infiltrate the base to recover the captives. In the end, Bakshi tried to stop Simmons from using a Splinter Bomb on Ward, only to get affected instead and was instantly disintegrated.[11]

Like this? Let us know!
Retrieved from "https://marvel.fandom.com/wiki/Sunil_Bakshi_(Earth-199999)?oldid=6074668"
Community content is available under CC-BY-SA unless otherwise noted.