"The Time of Revenge Has Come! Beat Down Iron Cross Group!!" 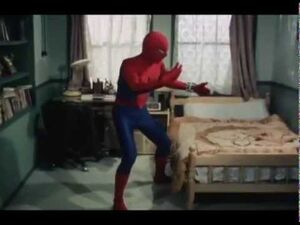 Episode Title
"The Time of Revenge Has Come! Beat Down Iron Cross Group!!"

You now have the power of the Spider-Man.

Appearing in "The Time of Revenge Has Come! Beat Down Iron Cross Group!!"

Synopsis for "The Time of Revenge Has Come! Beat Down Iron Cross Group!!"

In a cave somewhere, a man calls for his brother, Leopardon, who is a giant robot, and Leopardon flies to earth. Elsewhere, Professor Monster and Amazoness see the robot on screens in their lair. At the Yamashiro Astro-Archaeological Laboratory, Shinko Yamashiro, a young girl, sees an approaching object through a telescope. Her father, scientist Hiroshi Yamashiro, rushes over and looks through the telescope. The object is a spaceship, but they wonder if it could be a meteor. Elsewhere, young motorcyclist Takuya Yamashiro practices stunts on his motorbike. His little brother, Takuji Yamashiro, watches with awe. Takuya's girlfriend, Hitomi Sakuma, takes pictures of his stunts, but he suddenly stops, and hears a voice calling him brother. The spaceship, Leopardon, alias the Marveller, finally arrives on earth, and Takuya looks up and sees it. At the laboratory, Shinko and Hiroshi, Takuya's sister and father, run outside and see it as well. Many people all over the city see it, and it continues through the sky. It finally lands in a deserted cave, where the man calling it had been. In their lair, Professor Monster and Amazoness identify the ship, and Monster realizes that since the Marveller had fled to space 400 years ago, someone named Garia's telepathy must have reached it. Amazoness says that they should be worried that Professor Yamashiro may discover the Marveller, and this may upset his plans to invade earth. Amazoness, with orders from Monster to kill Yamashiro, disguises herself and leaves with one of Monster's tiny Machine BEMs, Boukunryu. Disguised as a newspaper editor, Amazoness goes to see Hitomi, and tells her to go see Dr. Yamashiro and ask him about the spaceship in the sky. Hitomi goes to the Yamashiro home, and she and Shinko tell Takuya to stop working on his motorcycle for tomorrow's race, since something more important has come up. Takuya's father comes in, and urges him to go on with the race. Takuya suddenly sees a spider on the wall, but it disappears, and Takuya hears the voice again, and it calls him brother and tells him to come. Takuya runs outside and screams for the voice's source to show itself.

The next day, the Yamashiros and Hitomi go to the crash sight and search for the ship. They split up, and Amazoness tracks them through the woods. She unleashes her creature, Boukunryu, which grows to human size. She then sends it after the search party, and changes out of her disguise. Back at the Yamashiro home, Takuya and Takuji prepare to leave, but Takuya hears the voice again and sees a giant spider web in the sky. Answering the summons, he leaves Takuji at home, and speeds off on his motorbike in the direction of the voice. Meanwhile, Dr. Yamashiro, Hitomi, and Shinko are chased through the woods by Boukunryu. The monster apparently takes Dr. Yamashiro, and the girls run out onto the main road, where they meet Takuya, who rides up and stops. Takuya continues riding, and finds his father. His father explains that he's noticed a lot of activity from a group that's secretly invading earth, but he doesn't know who they are. With his last breath, he asks Takuya to find and stop them. Takuya mourns his father, but looks up and sees the monster's footprints. He begins following them, but suddenly, a group of Iron Cross Soldiers, called Ninders, appear, and attack him. Takuya runs away from them, but they chase him, and he runs into a cave to get away from them. He trips, and falls down a hole, and into a remote part of the cave. Amazoness looks down the hole, and, assuming him dead, leaves. Takuya sees an old man in the cave, who calls himself Garia. Garia explains that he's from the Planet Spider, and he tells Takuya about the Iron Cross Army, led by Professor Monster. Takuya suddenly collapses, having taken an injury to the neck from one of the Iron Cross Army members' swords, and he goes unconscious. Fearing that Takuya may die if he doesn't do something, Garia places a bracelet on Takuya's hand, and the device injects spider extract into Takuya's bloodstream. Takuya wakes up, and realizes that he should've died. Garia explains that the extract saved him, and he says that only one person in the universe could pick up on his telepathy, and that Takuya was that person. He tells Takuya that he wanted to ask him for revenge on Professor Monster, who had invaded Planet Spider in the past. Garia says that he chased Monster to Earth for revenge, but was trapped in this cave filled with poisonous spiders by Monster. He endured the spiders for 400 years, and now he's dying. Garia tells Takuya that he now has the power of the Spider-Man. With that, he turns into a spider.

Later, Takuya goes home and lays down in bed. He hears Garia's voice tell him to put on the Spider-Protector, which is inside the bracelet. He does, and the Spider Protector, a costume, comes out. Takuya puts it on, and learns that he can do incredible things, such as climb walls and leap great distances. Shank and Takuji come into his room, and he climbs up onto the ceiling before they can see him. Not seeing him, they walk out, and Takuya jumps back down to the floor. Garia tells him that he has now fully become Spider-Man. Spider-Man does outside and fires a web from his bracelet, allowing him to swing onto a pole nearby. Below him, Hitomi pulls in and gets out of her car. Shank runs out, and Hitomi tells her that the nuclear physicist Professor Fujita was kidnapped by a dinosaur-like creature. Thinking that this must be the work of the Iron cross Army, Spider-Man leaves. Garia's telepathic voice tells him to uses his spider-senses to track them, and he begins jumping and winging through the city towards his target. He finds the place where his senses brought him, and he begins taking out the Ninders. He goes inside the building, and hears Amazoness talking to Fujita inside a room. He opens the door and introduces himself, and he begins fighting more of the Ninders. He frees Fujita, and webs the doorway, trapping their pursuers. They continue running outside, but Spider-Man is forced to fight off more Ninders. Amazoness unleashes Boukunryu, who grows to a gigantic size. After trying to subdue the creature on his own, Spider-Man realize that this is futile, so he uses his bracelet and summons the Marveller. Amazoness sends more Ninders after him, and he continues to fight them, until the Marveller arrives. A vehicle flies out of the Marveller, the Spider Machine GP-7, and Spider-Man jumps into it. It flies back into the Marveller, and Spidey takes control of the ship, making it transform into the robot, Leopardon. After using the mech's various weapons to overwhelm the beast, Leopardon finally kills Boukunryu. Amazoness and her minions return to their lair, and relay the news of Spider-Man to Professor Monster, who is greatly displeased.

Retrieved from "https://marvel.fandom.com/wiki/Supaidāman_(TV_series)_Season_1_1?oldid=5720952"
Community content is available under CC-BY-SA unless otherwise noted.