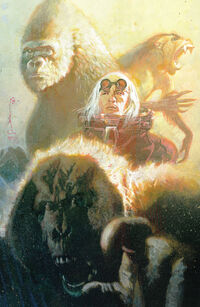 The Super-Apes is a general term given to the name of the primates used by the Russian scientist and criminal Ivan Kragoff, aka the Red Ghost. The purpose of this entry is to catalogue the history of all the apes that Kragoff has used over the years.

The original apes that became the first incarnation of Ivan Kragoff's Super-Apes included the gorilla Miklho, the orangutan Petoro[2], and Igor the baboon[3]. These apes were trained to be obedient and follow the verbal commands of Kragoff. When Ivan sought to replicate the accident that gave the Fantastic Four their powers, he brought the apes along with him aboard his ship. As per his specifications they were bombarded with even more Cosmic Rays than the Fantastic Four and were endowed with enhanced abilities. Miklho gained super-strength, Peotor the power over magnetism, and Igor gained shapeshifting abilities. Their missing coincided with the Fantastic Four's mission to investigate the Blue Area of the Moon. There the Igor -- now calling himself the Red Ghost due to his ability to become intangible -- and his Super-Apes attacked the Fantastic Four. The battle attracted the attention of the Watcher an alien being charged with observing and recording human history. After briefly subduing the Super-Apes he allowed the two factions to fight it out. The Ghost captured the Fantastic Four's Invisible Girl and had his apes watch over them. When the Invisible Girl learned that Ivan kept his apes obedient by withholding food she fed them and they soon turned on their master, allowing the Fantastic four to leave and strand the Red Ghost and his apes on the moon[4]

The Red Ghost managed to make his apes obedient to him again and he constructed a ship that could be controlled by Peotor's magnetic powers. He used this ship to later strand the Fantastic Four on the moon. When the Fantastic Four sought refuge in the Watcher's citadel, the Red Ghost and his apes went after him. When the Red Ghost was lost in a dimensional portal, the Super-Apes fled back to Earth in their own ship[5]. When the Red Ghost resurfaced he found his Super-Apes and returned to the Moon to try and loot the Watcher's citadel for its advanced technology. He and his Super-Apes walked through a chronal spike which transported them a number of years in the future where they interacted with future versions of themselves before ultimately being returned back to their own time empty handed[6]. The Super-Apes later accompanied their master when he was manipulated by Dr. Doom into attacking the wedding of Mr. Fantastic and the Invisible Girl. The apes clashed with the Fantastic Four until they and the Red Ghost were banished to a mystical realm by Sorcerer Supreme Dr. Strange. [7] Kragoff and the Super-Apes were later pulled forward in time by Aron the Rogue Watcher to battle the Fantastic Four and Fantastic Force. When Aron was defeated, all his pawns were returned to their proper eras with no memories of the battle. [8].

Believing that his original Super-Apes were destroyed, the Red Ghost trained two new apes he named Alpha and Beta. At first they were normal apes, but after the Red Ghost had the Unicorn steal a Cosmic Ray from Stark Industries he intended to endow them with super powers. After a clash with the armored hero Iron Man, the Red Ghost did just that, endowing Alpha with enhanced strength and Beta with the ability to control minds[9]. Taking his new Super-Apes to Africa he sent them into the jungles to amass an army of primates to assist in his take over of a SHIELD satellite facility. Although Red Ghost managed to take control of the facility he was attacked by Iron Man and the Unicorn. The tables were turned when Alpha and Beta -- their intelligences enhanced by the Cosmic Ray -- turned on their master forcing him to flee. Alpha and Beta then went into the jungle to lead their army of apes[10]. Their subsequent fate is unknown.

Return of the Original Apes

Red Ghost later learned that his original Super-Apes were alive and well and recovered them. They assisted him in battling Kree soldier Captain Marvel in an attempt to duplicate his Nega-Bands. A plan that ended in failure[11]. They also assisted him in trying to steal Mr. Fantastic's new Gravity Localizer but were opposed by the Human Torch and Spider-Man. Spider-Man was able to stop the Super-Apes from stealing his Spider-Buggy by using fruit pies[12]. When the Red Ghost became trapped in his intangible form he attempted to steal Stark Industries new Cosmitronic Cannon to cure himself, sending his Super-Apes to capture its inventor Iron Man[13]. This led to another clash with Iron Man, which ended in the Red Ghost's apparent demise when the Cosmitronic Cannon made it so if he turned intangible again it would dissipate his atoms[14]. When the Red Ghost reconstituted himself[15] he recovered his Super-Apes when he joined the Leaders' group of genius criminals the Intelligencia. The Super-Apes were used to recover long lost Alexandrian texts from the Eternal realm of Olympia. [16]

Some months later, the Super-Apes gained enhanced intelligence due to their link to the Red Ghost, while the Ghost himself became a simpleton. Becoming aware of animal testing the Super-Apes intended to get revenge by hiding in an research lab at Empire State University where they prepared a nerve gas attack. But this was thwarted by the Fantastic Four[23]. When the Super-Apes were seen again, they and their master were back to their normal mental capacities and shared a cell in the Cage prison. The apes afforded Red Ghost the protection he needed from the more aggressive inmates[24]. During this period he had an ape named Dmitri sharing a cell with him. Dmitri's powers are unrecorded and his fate after Red Ghost escaped the Cage are unknown[1]. When the Fantastic Four were out hunting their various foes, the Red Ghost was also attacked. Despite the assistance of his Super-Apes he was captured once again[25]. Miklho and Peotor soon began developing a renewed intelligence and the Red Ghost put them through communist education before bringing them to the nation of Niganda where their master was working with scientist Erich Paine to create a race of intelligent apes[26]. Finding that Paine tortured his test subjects, Miklho and Peotor helped a rogue baboon in attempting to unleash a virus that would kill off the human population, but their attempt was thwarted by the X-Men and the Black Panther. [27]

The Super-Apes, having reverted back to their base intelligence, were next used by the Red Ghost in a bank robbery, but this was thwarted by the Avengers[28]. Later, the Red Ghost took his loyal creations with him to LA to investigate sightings of Ape-X where they clashed with Speedball a simian hero from Earth-8101.[29] Speedball and Ape-X defeated Red Ghost and the Supe-Apes and send them running.[30][31]

Fall of the Hulks

Red Ghost brought his Super-Apes with Intelligentia on the delivery of the final cache of Alexandarian texts from Atlantis to Dr. Doom's castle in Latveria. When Doom betrayed them, the Super-Apes defender the master and covered his escape[16]. Soon the Super-Apes were utilized in Intelligentia's upcoming conflict against the Hulk[32]. They were sent with their master to Wakanda to kidnap the Black Panther and Beast of the X-Men as part of a plot to capture the eight most intelligent men on Earth. Their kidnapping was interrupted by the Red Hulk who slew Miklho. Furious, the Red Ghost used his powers to knock out the Hulk and escape with his prisoners[33]. When Intelligentia's plans eventually failed, the Red Ghost fled to St. Petersburg, Russia. There he found a new baby gorilla named Grigori and endowed it with enhanced strength. He and his apes were soon captured by the Sensational and Savage She-Hulks[34]. They tried to escape capture over Nevada airspace and when this failed, Red Ghost tried to crash the ship but they were stopped by the Hulk and incarcerated[35]

Broken out of prison, the Red Ghost and his Super-Apes reconnected with Intelligentia and began working on a new Zero Cannon which used Peotor's magnetic abilities to power it. They were quickly defeated in battle against Dr. Octopus and his Sinister Six[36]. When the Red Ghost began working with disposed Latverian Prime Minister Lucia von Bardas he provided a number of intelligent apes with combat training to assist in their mission to destroy Latveria. These apes were easily bested by the Winter Soldier and the Black Widow who foiled Lucia's plot[37][38][39][40][41]. The Red Ghost's regular Super-Apes and the rest of Intelligencia were almost drowned later when they were attacked by the mercenary Deadpool[42].

Most recently the Super-Apes accompanied their master to the moon on another attempt to steal the Watcher's equipment. Passing through the same chronial spike the Super-Apes were separated from their master. Wandering along the surface they encountered past and future versions of themselves. The apes were then attracted to bananas being produced by the Future Foundation's wards -- Bentley-23, Adolf Impossible, Leech, Artie Maddicks, Onome, Vil, Wu, Mik, Korr, Turg and Tong -- who made fast friends with the apes. However when various Red Ghost's from different points in history appeared before them the children attacked them and drove them away. [43]

The Super-Apes as well as the Red Ghost were later killed by Steve Rogers so he could take over their hideout and use it to hide Erik Selvig from the Red Skull.[44]

Retrieved from "https://marvel.fandom.com/wiki/Super-Apes_(Earth-616)?oldid=5884399"
Community content is available under CC-BY-SA unless otherwise noted.