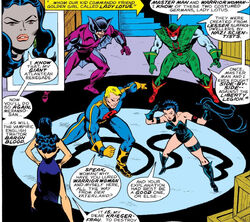 The Super-Axis is a superhuman created to counteract the Invaders. The team consists of former Invaders villains Master Man, U-Man, Baron Blood and Warrior Woman. The team are brought together by the Japanese spy Lady Lotus. Using hypnotism to control the villains, Lotus intends to use the Super-Axis to undermine the United States during World War II.[1]

The team individual fight with with the Invaders, and the original Human Torch is also hypnotised. In a final battle at an amusement park, the entire Super-Axis confront the Invaders, but are defeated due to their team work. Human Torch also frees himself from Lotus' control, and attempts to find the villain team, who has fled. Later Lady Lotus was warned by the master villain the Yellow Claw about the dangers of overconfidence.[2]

Like this? Let us know!
Retrieved from "https://marvel.fandom.com/wiki/Super-Axis_(Earth-616)?oldid=5650070"
Community content is available under CC-BY-SA unless otherwise noted.