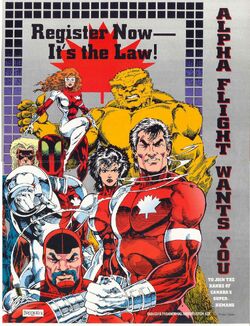 The terms of the act entailed the government employment of all super-powered individuals, including mutants, who were then enlisted in one of the government Department H "Flight" programs such as "Alpha Flight" and "Gamma Flight". The Act was controversial and resulted in the disbandment of the Canadian government's super-teams (the various "Flights").[3] The Canadian SRA was never explicitly repealed or overturned, however it is no longer mandatory.[4]

Retrieved from "https://marvel.fandom.com/wiki/Super-Powers_Registration_Act?oldid=3851083"
Community content is available under CC-BY-SA unless otherwise noted.