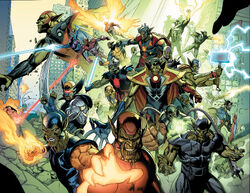 Origin
Created as super-powered agents of the Skrull Empire.

The Super-Skrulls are the elite shock troops, infiltrators, and special operatives of the Skrull Empire. Super soldiers who have been given super powers, usually those of Earth's heroes but also that of other aliens (e.g. Shi'ar Imperial Guard or the Silver Surfer).[2][3][4][5] Originally their powers were technological in nature (e.g. cybernetic implants) which simulated those powers, but eventually the Skrulls were able to give the Super-Skrulls those super powers at the genetic level.[6][7][8] Super-Skrulls can be Skrull warriors who volunteered to undergo the enhancement to become Super-Skrulls.[1][9] They can also be lab-grown clones who were "born" as Super-Skrulls.[8]

The Skrull Empire deploys the Super-Skrulls individually or in squadrons that can be dozens strong.[5] Assignments given to Super-Skrulls have included protecting Skrull worlds,[10] serving as front-line combat shock troops,[5] as doppelgangers of superheroes,[2][4] or as sleeper agents.[11] The size of the Super-Skrull force is unknown but in the Skrull invasion of Earth, thousands of Super-Skrulls were deployed in New York City alone[12]. Super-Skrulls are trained at special facilities, such as the "War-Moon" orbiting Tarnax IV which was destroyed along with the throneworld by Galactus and the multiple training centers on Tarnax VII which were destroyed by the Kree Starbrand a decade after the invasion of Earth.[13][14]

The Ani-Men Skrull is a Super-Skrull that has the powers of the Ani-Men.[20]

One of the Skrulls attacking Wakanda had Loki's powers and wielded technological copies of both Thor's Mjolnir and Beta Ray Bill's Stormbreaker.[21]

One of the Skrulls attacking London had all the powers of original Avengers members Ant-Man, Hulk, Iron Man, Thor, and Wasp.[22]

The first Criti Noll has the powers of Yellowjacket. She was reluctant to follow the Invasion plans and was killed by the Dum Dum Dugan Skrull.[23]

Veranke created a clone of Criti Noll who posed as Hank Pym. She not only had Hank Pym's powers, but also the powers of Black Panther, Quicksilver, and Vision.[24]

The Godkiller is a specially-bred Super-Skrull that has the powers of Battleaxe, Thundra, Titania, and Volcana. She was also bred to wield Stormbreaker.[25]

The Illuminati Skrull was the first of many, having the super powers of Black Bolt (whom he was posing as), Doctor Strange, Mister Fantastic, Namor and Professor X. This Skrull revealed himself when Iron Man brought back the group one last time, to talk about the Skrull posing as Elektra. As they discussed what to do with the body, the Skrull revealed himself and attacked. The Skrull was killed by Namor, whom twisted his neck, by stabbing him on a piece of rubble.[27]

One Illuminati Skrull variation partaking in the first invasion was shown to have a copy of Doctor Strange's Cloak of Levitation, copies of Iron Man's left arm and arc reactor, Black Bolt's body, and Mister Fantastic's elasticity.[28]

Another Illuminati Skrull was seen in the invasion of New York and was decapitated by Menace.[29]

The Inhuman Skrull partook in the attack on Attilan and has the powers of the Inhuman Royal Family.[30]

One of the Skrulls that attacked Wakanda not only had Luke Cage's skin, it also had Wolverine's claws, Iron Fist's "iron fist" move, Bullseye's aim, and the fighting styles of Captain America, Moon Knight, Shang-Chi, Daredevil, Elektra, and Black Panther.[31]

One of the Skrulls attacking Wakanda had the combined strengths of Hulk, Juggernaut, and Thing.[21]

This Super-Skrull had the powers of the Sinister Six members Rhino, Venom. Lizard, Electro, Hydro-Man, and Sandman. He posed as Spider-Man to find the real Spider-Man where he fought Jackpot who managed to kill him. His appearance shows him with the head mask of Rhino, the body of Venom, and the tail of Lizard.[33]

One of the Skrulls attacking London possessed the powers of Squadron Supreme members Hyperion and Whizzer.[22]

The Thor-Skrull appeared along with the X-Skrull after Namor slew the Illuminati-Skrull. This Skrull wielded a technological copy of Mjolnir. It was killed by an explosion set off by Iron Man.[27]

A Super-Skrull that attacked Songbird not only had her powers, but also had the powers of Atlas.[34]

The X-Skrulls are the type of Super-Skrull that have the powers of the X-Men. There have been two X-Men Skrulls, both appearing to have Wolverine, Colossus, Nightcrawler, and Cyclops' powers. One X-Skrull attacked the Illuminati alongside the Thor Skrull.[27] Rl'nnd is the first example of the X-Skrull.[35] Some of the X-Skrulls that sport Wolverine's powers also wore his head mask that was amalgamated with Cyclops' Visor.[28]

A version of an X-Skrull that fought the New Warriors had the powers of the original X-Men Angel, Beast, Cyclops, Iceman, and Jean Grey.[36]

One X-Skrull who had the powers of Colossus, Cyclops, and Wolverine took part in the invasion of Attilan.[37]

Retrieved from "https://marvel.fandom.com/wiki/Super-Skrulls_(Earth-616)?oldid=5146294"
Community content is available under CC-BY-SA unless otherwise noted.