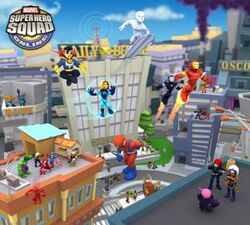 Super Hero City was a large metropolis located near Villainville and home to several superhero teams including the Super Hero Squad.

To protect the citizens of Super Hero City, the Mayor commission the construction of a large wall to divide Super Hero City and Villainville. Unfortunately, a Fractal-empowered Mole Man was able to use his monsters to attack the City from Subterranea.[2]

Super Hero City was located very near to Asgard and connected via the Bifrost Bridge.[3]

Like this? Let us know!
Retrieved from "https://marvel.fandom.com/wiki/Super_Hero_City?oldid=6081625"
Community content is available under CC-BY-SA unless otherwise noted.