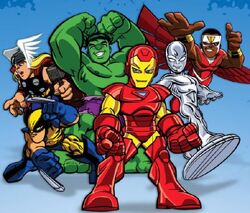 You all are truly amazing companions.

The team exists for the purpose of protecting Super Hero City against villains such Doctor Doom, Thanos, Galactus and Magneto. They are led by Iron Man and have many super powered allies such as the Fantastic Four. They are employees of S.H.I.E.L.D. and report directly to Ms. Marvel. [citation needed]

Like this? Let us know!
Retrieved from "https://marvel.fandom.com/wiki/Super_Hero_Squad_(Earth-91119)?oldid=5736533"
Community content is available under CC-BY-SA unless otherwise noted.