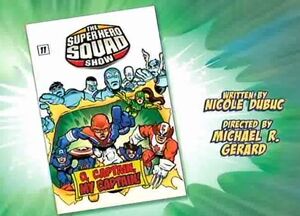 Wolverine, I am having much difficulty wearing these suspenders!

Appearing in "O, Captain, My Captain!"

Synopsis for "O, Captain, My Captain!"

When he is tired of all he can take with the Super Hero Squad, Wolverine joins up with the international All-Captains Squad (consisting of Captain America, Captain Australia, Captain Brazil, Captain Britain, and Captain Liechtenstein) as Captain Canada where he helps them fight Plantman in the Amazon. Meanwhile, the rest of the Super Hero Squad have an embarrassing encounter at Ringmaster's circus when Doctor Doom sends Abomination and M.O.D.O.K. to recruit Ringmaster.

Like this? Let us know!
Retrieved from "https://marvel.fandom.com/wiki/Super_Hero_Squad_Show_Season_1_10?oldid=7016858"
Community content is available under CC-BY-SA unless otherwise noted.