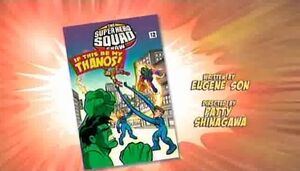 What the Don Heck is this? The Skrull invasion plan!

Appearing in "If This Be My Thanos!"

Synopsis for "If This Be My Thanos!"

With some of the members on vacation, Iron Man, Thor and Hulk help out the Fantastic Four when Super-Skrull and his fellow Skrulls invade Super Hero City. Meanwhile, Thanos and Doctor Doom form an alliance in order to obtain a specific artefact from the Baxter Building. While the Fantastic Four and the other Super Hero Squad members are fighting the Skrulls, Falcon and H.E.R.B.I.E. defend the Baxter Building from Abomination, M.O.D.O.K., and Trapster. Villains: Super-Skrull, Thanos, Doctor Doom, Abomination, M.O.D.O.K., and Trapster.

Like this? Let us know!
Retrieved from "https://marvel.fandom.com/wiki/Super_Hero_Squad_Show_Season_1_11?oldid=7037785"
Community content is available under CC-BY-SA unless otherwise noted.