"Deadly Is the Black Widow's Bite!" 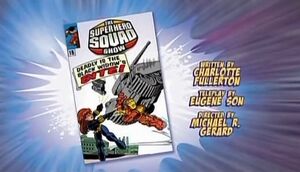 Appearing in "Deadly Is the Black Widow's Bite!"

Synopsis for "Deadly Is the Black Widow's Bite!"

Black Widow joins the Super Hero Squad and shows that she can hold her ground against Abomination, M.O.D.O.K., and Screaming Mimi. Unbeknownst to them, she is really Mystique in disguise sent by Doctor Doom to steal the Infinity Fractals. When Mystique (alongside Abomination, Klaw, M.O.D.O.K., and Toad) nearly gets the Infinity Fractals held at the Vault, the Super Hero Squad get an unlikely assistance from S.H.I.E.L.D. Agent Songbird (who had been undercover as Screaming Mimi all along). Villains: Abomination, M.O.D.O.K., Mystique, Doctor Doom, Klaw and Toad.

Like this? Let us know!
Retrieved from "https://marvel.fandom.com/wiki/Super_Hero_Squad_Show_Season_1_12?oldid=7086663"
Community content is available under CC-BY-SA unless otherwise noted.