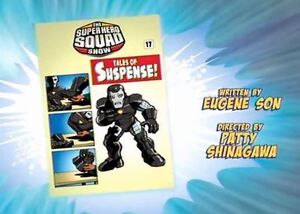 Iron Man, please turn in your Super Hero Squad identity card, your corporate credit card, your key to the city, and your standard issue Squaddie undies.

Appearing in "Tales of Suspense!"

Synopsis for "Tales of Suspense!"

Like this? Let us know!
Retrieved from "https://marvel.fandom.com/wiki/Super_Hero_Squad_Show_Season_1_16?oldid=6499041"
Community content is available under CC-BY-SA unless otherwise noted.