"Stranger from a Savage Land!" 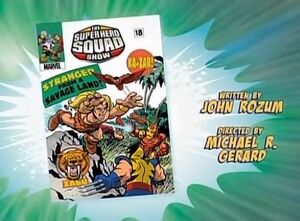 Come on, Reptil, help me gather up these crooks.

Appearing in "Stranger from a Savage Land!"

Synopsis for "Stranger from a Savage Land!"

When a smilodon is brought to Super Hero City from the Savage Land, a mysterious jungle lord named Ka-Zar shows up stating that the smilodon is actually his companion Zabu. When the Super Hero Squad encounter Ka-Zar, they learn of his mission and help him rescue Zabu. Meanwhile, Doctor Doom sees the Star Quartz (which will bind and merge any metal in the presence of Vibranium) around Zabu's neck and sends Toad, Thunderball, Sabretooth, and Batroc the Leaper to steal Zabu in a plot to reforge the Infinity Sword. Villains: Doctor Doom, Toad, Thunderball, Sabretooth, and Batroc.

Retrieved from "https://marvel.fandom.com/wiki/Super_Hero_Squad_Show_Season_1_17?oldid=5797656"
Community content is available under CC-BY-SA unless otherwise noted.