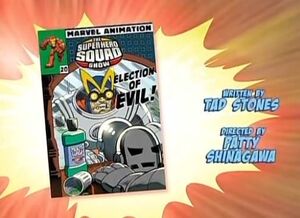 Appearing in "Election of Evil!"

Synopsis for "Election of Evil!"

The Mayor's re-election bid goes awry when Egghead wins by a landslide (thanks to a little mass mind-control). But his reign at city hall makes life in Super Hero City a bureaucratic nightmare for heroes and villains alike. Wolverine and the Mayor are up against every hero and villain in a desperate attempt to free everyone from Egghead's control and stop the villains' planned invasion. Villain: Egghead.

Like this? Let us know!
Retrieved from "https://marvel.fandom.com/wiki/Super_Hero_Squad_Show_Season_1_19?oldid=6499044"
Community content is available under CC-BY-SA unless otherwise noted.