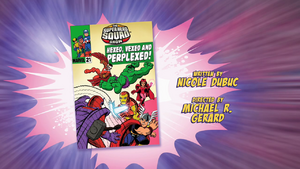 Dad's got another super-villain scheme going on with Dr. Doom.

Appearing in "Hexed, Vexed and Perplexed!"

Synopsis for "Hexed, Vexed and Perplexed!"

Magneto is in town with his children Quicksilver and Scarlet Witch who he brought into helping him in a sinister plot to steal the Infinity Fractals at the Vault for Doctor Doom. During the first fight, Falcon develops a crush on Scarlet Witch after she heals Redwing.

Like this? Let us know!
Retrieved from "https://marvel.fandom.com/wiki/Super_Hero_Squad_Show_Season_1_21?oldid=6547444"
Community content is available under CC-BY-SA unless otherwise noted.