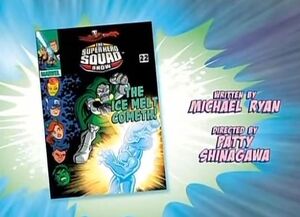 That's it! No more Mr. Ice-guy. I now proclaim this my Icey cave of being aloneness.

Appearing in "The Ice Melt Cometh!"

Synopsis for "The Ice Melt Cometh!"

Doctor Doom sends his "Team Toxic" (consisting of Pyro Trapster and Zzzax) out to the North Pole. His plan is to have them construct the super-spinner machine in order to spin the Earth enough to send Super Hero City into a space device built by Doctor Doom in his latest plot to get the Infinity Fractals only for Team Toxic to run afoul of Iron Man, Thor, and Wolverine. While Flatman and Reptil lecture about the polar ice caps, the world starts flooding after Trapster sets off their super-spinner machine's self-destruct sequence causing damage to the polar ice caps. Now Iron Man must convince Iceman to help save the day. Villains: Doctor Doom, Pyro Trapster and Zzzax.

Retrieved from "https://marvel.fandom.com/wiki/Super_Hero_Squad_Show_Season_1_22?oldid=5287639"
Community content is available under CC-BY-SA unless otherwise noted.