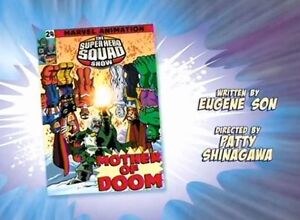 I do not trust our visitor. After all, the enemy of our friend's enemy is no friend of mine.

Appearing in "Mother of Doom"

Synopsis for "Mother of Doom"

Doctor Doom conquers Chthon's mystical dimension to free his mother Cynthia Von Doom (who changed her name to "Coco" because "Cynthia" is too drab). Though Doom ends up with Chthon's evil powers, he also finds himself dealing with his mother's monstrous nagging. Chthon comes to the Super Hero Squad and Doctor Strange for help. Meanwhile, Odin wants Thor to return to Asgard and orders him to handle his last-minute stuff on Earth before his time is up. Villain: Doctor Doom.

Like this? Let us know!
Retrieved from "https://marvel.fandom.com/wiki/Super_Hero_Squad_Show_Season_1_24?oldid=6547443"
Community content is available under CC-BY-SA unless otherwise noted.