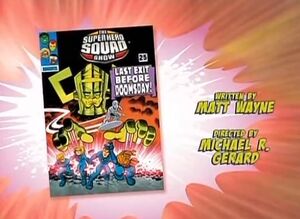 Galactus must eat. Who cares what happens to the puny creatures that live on my food.

Appearing in "Last Exit Before Doomsday!"

Synopsis for "Last Exit Before Doomsday!"

Stardust arrives on Earth to announce the coming of Galactus, devourer of worlds. Captain America and Ms. Marvel begin constructing a space ark to save the inhabitants of Earth while the SHS team up with the Fantastic Four to face Galactus.

Retrieved from "https://marvel.fandom.com/wiki/Super_Hero_Squad_Show_Season_1_25?oldid=5614715"
Community content is available under CC-BY-SA unless otherwise noted.