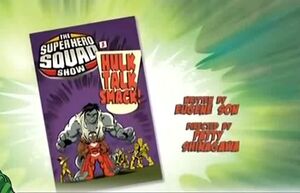 "Wait, did I just lose an argument... to the Hulk?

During a chaotic battle with Klaw and Screaming Mimi, a fractal's cosmic power turns the Hulk into the Gray Hulk. While Falcon and the Wasp babysit this unlikable, brainy Hulk, the Squad chase down the Lethal Legion in a battle to save Super Hero City.

Like this? Let us know!
Retrieved from "https://marvel.fandom.com/wiki/Super_Hero_Squad_Show_Season_1_4?oldid=6499054"
Community content is available under CC-BY-SA unless otherwise noted.