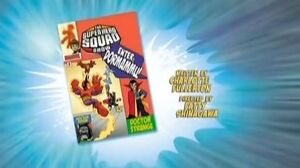 Huh, Dormammu and the Mindless Ones, I own all your records...

Supernatural wackiness is turning the city (and the Squad) upside-down. The Squad goes to the mysterious Dr. Strange for help, but Strange tricks them into battling the dread Dormammu. It seems a wayward fractal is stuck in the Eye of Agomotto – but can the heroes possibly free Dr. Strange from the fractal's influence, defeat Dormammu and rescue the city from an army of Mindless Ones, all at the same time?

Like this? Let us know!
Retrieved from "https://marvel.fandom.com/wiki/Super_Hero_Squad_Show_Season_1_5?oldid=6499055"
Community content is available under CC-BY-SA unless otherwise noted.