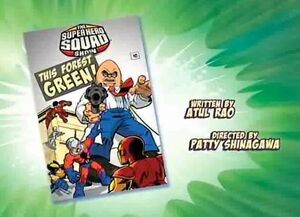 We got a dip in the salsa.

Appearing in "This Forest Green!"

Synopsis for "This Forest Green!"

Doom's ally, Egghead, hatches a scheme to steal a fractal in the Squad's Helicarrier by shrinking to insect-size. Fortunately, the Squad can count on Ant-Man to help them chase down the villains at micro-scale. But being super-small leads them into some very unpleasant places, including Hulk's nose.

Like this? Let us know!
Retrieved from "https://marvel.fandom.com/wiki/Super_Hero_Squad_Show_Season_1_9?oldid=6547442"
Community content is available under CC-BY-SA unless otherwise noted.