"Lo, How the Mighty Hath Abdicated!" 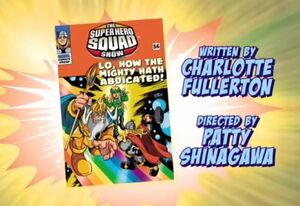 You see when Odin married you, he married an atrociously common, commoner. He gave up his right to the throne. He's no longer the king, so you're not the queen!

Appearing in "Lo, How the Mighty Hath Abdicated!"

Synopsis for "Lo, How the Mighty Hath Abdicated!"

Enchantress places a love spell on Odin in an attempt to become queen of Asgard, but a forgotten rule forces him from the throne and makes his son Thor king instead, which both she and Loki try to take advantage of. Meanwhile, Magneto and Quicksilver discover Wanda joining with the Super Hero Squad and hitch a ride to try and take her back from them.

Like this? Let us know!
Retrieved from "https://marvel.fandom.com/wiki/Super_Hero_Squad_Show_Season_2_10?oldid=6499061"
Community content is available under CC-BY-SA unless otherwise noted.