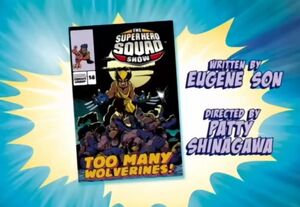 I'm the best there is at what I do. And what I do can't be imitated, copied, cloned or used without the expressed written permission of the Super Hero Squad and Marvel Entertainment, LLC. Batteries not included. All rights reserved. Terms, conditions, and restrictions apply. We clear, bub?

Appearing in "Too Many Wolverines!"

Synopsis for "Too Many Wolverines!"

Like this? Let us know!
Retrieved from "https://marvel.fandom.com/wiki/Super_Hero_Squad_Show_Season_2_12?oldid=6499063"
Community content is available under CC-BY-SA unless otherwise noted.