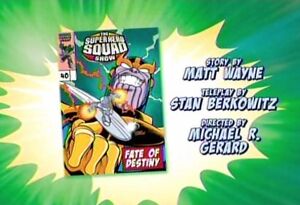 Add infinity to infinity and I can scatter the six of you across time, space, and reality. You'll be out of my universe forever!

Appearing in "Fate of Destiny"

Synopsis for "Fate of Destiny"

Thanos completes his Infinity Stone collection and the Super Hero Squad faces him in a final showdown for the fate of the universe. However, when requesting backup from one of their own, they encounter a betrayal that changes everything.

Retrieved from "https://marvel.fandom.com/wiki/Super_Hero_Squad_Show_Season_2_14?oldid=5797672"
Community content is available under CC-BY-SA unless otherwise noted.