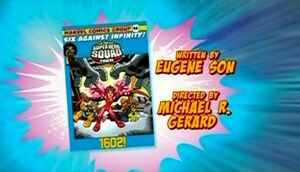 After being thrown into a portal by Dark Surfer, Scarlet Witch ends up in the Marvel 1602 universe where she finds a town under attack by pirate versions of Doctor Doom, M.O.D.O.K., and Abomination. Unfortunately for Scarlet Witch, the townspeople do not appreciate witches.

Retrieved from "https://marvel.fandom.com/wiki/Super_Hero_Squad_Show_Season_2_20?oldid=5736532"
Community content is available under CC-BY-SA unless otherwise noted.