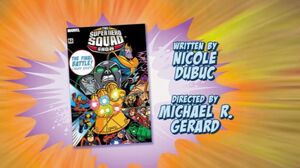 The Six Squaddies must each face the Dark Surfer one on one, in a final battle for the fate of reality that takes them to the edge of the universe-and a last stand at the cosmic Infinity Pool that brings everything full circle!

Like this? Let us know!
Retrieved from "https://marvel.fandom.com/wiki/Super_Hero_Squad_Show_Season_2_26?oldid=6499078"
Community content is available under CC-BY-SA unless otherwise noted.