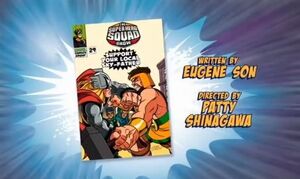 Zeus keeps trying to relive his past glories through me. Like I wanna be Zeus 2.0, the sequel, you know?

Jealous of the actions of Thor on Earth, Greek god Zeus challenges Odin to a battle between the god of Thunder and his son Hercules. Reptil sneaks along to help Thor out. Meanwhile, the Mayor of Super Hero City sends Invisible Woman to secretly broadcast the challenge for all of Super Hero City to see.

Like this? Let us know!
Retrieved from "https://marvel.fandom.com/wiki/Super_Hero_Squad_Show_Season_2_5?oldid=6499081"
Community content is available under CC-BY-SA unless otherwise noted.