"Double Negation at the World's End!" 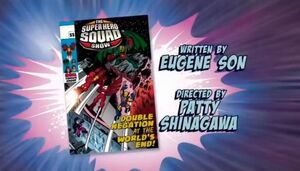 Brrrr. Urban legend. Kids are too smart. They're not going to do something just 'cause they see the Human Torch doing it on television.

Appearing in "Double Negation at the World's End!"

Synopsis for "Double Negation at the World's End!"

Thanos has the Space Gem stolen from him by his older sister Nebula. She uses the Squad Helicarrier's Teleporter to escape, but ends up in the Negative Zone. Wolverine and H.E.R.B.I.E. team up as they were the only ones aboard the Helicarrier at the time. Having just returned from a trip to Six Eggs Over Easy amusement park, Iron Man & Falcon venture into the Zone to save them.

Like this? Let us know!
Retrieved from "https://marvel.fandom.com/wiki/Super_Hero_Squad_Show_Season_2_7?oldid=6499083"
Community content is available under CC-BY-SA unless otherwise noted.