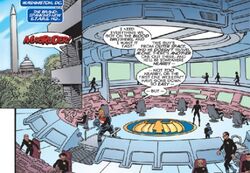 S.T.A.R.S. (Superhuman Tactical Activities Response Squad) is an organization set up by Valerie Cooper under the Commission on Superhuman Activities supervision. The team S.T.A.R.S. was created as a police force to counter superhuman threats in the United States of America. The Commission selected hero John Walker aka the U.S.Agent to be their representative and marshal. With the U.S.Agent's leadership and with help of Agent Kali Vries the team stopped various super criminals such as Ronan the Accuser, Poundcakes, Piledriver, Power Broker, Blood Brothers, and many more. S.T.A.R.S. current status is unknown since U.S.Agent left them to work with the New Invaders.

Like this? Let us know!
Retrieved from "https://marvel.fandom.com/wiki/Superhuman_Tactical_Activities_Response_Squad_(Earth-616)?oldid=5834468"
Community content is available under CC-BY-SA unless otherwise noted.