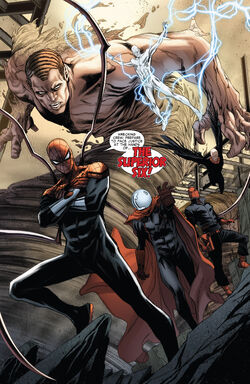 Origin
A team of brainwashed supervillains selected by Spider-Man to serve him in his war against crime.

Wrecking Crew! Prepare to face justice at the hands of... The Superior Six!

Dr. Octopus, now Spider-Man, never liked the idea of working with the Avengers, thus sought to have a team of his own, a superior team.

The first member to "join" was Flint Marko, a.k.a. William Baker, a.k.a. Sandman, after he was defeated by Peter Parker during Doc Ock's plan to destroy the Earth. Sandman's "soul sand grain" was extracted and locked away in the Baxter Building. Otto managed to obtain this grain and put it in his secret lab.[1]

The second member was Maxwell Dillon, a.k.a. Electro, who after being hurled into space by Thor, returned to Earth for revenge, however, Thor and Spider-Man were able to stop and defeat him. Electro was locked away in Otto's underwater lab.[2]

The third member was Dmitri Smerdyakov, a.k.a. Chameleon, who after his involvement in Doc Ock's plan to destroy Earth, was taken into S.H.I.E.L.D. custody. Otto needed him for his team, so he broke him out of a S.H.I.E.L.D. Helicarrier, and imprisoned him in his underwater lab instead.[3]

The fourth member was Mysterion, new in the world of supervillains. Otto caught Mysterion while robbing a bank, at first mistaking him for Quentin Beck, the original Mysterio, who betrayed him in his scheme to destroy Earth. But after seeing his face, he realized it wasn't him, yet Otto imprisoned Mysterion alongside the others.[4]

The fifth and last member was Adrian Toomes, a.k.a. The Vulture. After Otto's first encounter with Toomes as Spider-Man, Vulture sought revenge with other victims of Spider-Man's newfound brutality. But he was yet again defeated, and taken by Otto to be locked up amongst the other four villains in his secret underwater lab.[5]

Dr. Edward Lansky, a.k.a. the Lightmaster, set his eyes on Alchemax, and their newest invention; a device which could work in sync with his own light-based powers. Lightmaster hired the Wrecking Crew to steal it, however, Spider-Man thwarted them with his new-found team; The Superior Six.[6] Spider-Man lost his mind control over the Superior Six members (due to Sun Girl's wide-spread attack) during a battle against the Masters of Evil, and they attacked him for controlling them.[7]

Retrieved from "https://marvel.fandom.com/wiki/Superior_Six_(Earth-616)?oldid=5231179"
Community content is available under CC-BY-SA unless otherwise noted.