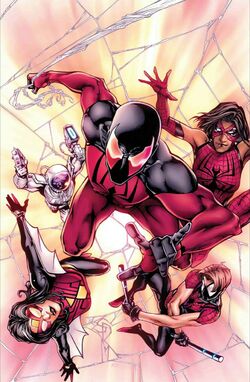 I've embarked on a quest to raise an army of Spider-Men to fight this creature. Join me, or stay and die.

After the Superior Spider-Man was time-displaced to 2099, he built a time machine and attempted to return home. Unfortunately, changes in the surrounding vibrational frequencies caused him to repeatedly end up in alternate timelines. Curiously, each time he found a deceased Peter Parker with similar deaths.

Realizing someone was hunting spiders across the Multiverse, he decided to recruit other spiders to kill him.[1]

The spiders came up with a plan: ambush Karn, take his energy away from him, them kill him. They ambushed Karn during his attack on a cyborg Spider-Man, they saw this plan come to light. Unfortunately, Karn had taken in to much life force to take away and the plan failed. They decided to still try to defeat him, but two of his siblings joined the fight. Retreating, they now realized they weren't fighting one man; they were fighting a family![3]

It seems that Otto would be able to block their Web of Destiny signal from the Inheritors using a Cloaking Device and Otto sent his "agents" to recruit more spiders.[4]

Later, the team were confronted by a larger team of Spider-Totems hoping to recruit them into their ranks. It didn't go well due to Otto's demeanor. To make matters worse, Scarlet Spider and Silk couldn't be masked by Otto's cloaking device. As a result, Daemos found them.

Despite the loss of Spider-Cyborg, the combined teams killed Daemos. During a heated argument by Otto and Old Man Spider, Daemos reappeared accompanied by his siblings, Brix and Bora. The teams, outmatched, retreated to Earth-13, where Otto attempted to bring the two teams under his command.[5] However, this effort was opposed by Spider-Man, who stated firmly that he was in charge, defeating Otto in a fight by exploiting Otto's belief that he was a past version of Otto's body rather than a future Peter to reinforce how killing the Inheritors couldn't work given their ability to come back. With this demonstration of the flaws in Otto's strategy, his army was incorporated into the other group rather than Otto taking control himself, although Peter acknowledged the value of Otto's intelligence even if he disregarded his intentions.[6]

The Inheritors had a plan to use the Jackal's technology to resurrect Solus, who was killed by the Other during the first war. Otto knew they would need Ben Reilly's knowledge, since he was recently the Jackal, and considering his mental instability for the many times he was killed and resurrected by the Original Jackal, he knew consuming him would make the insane. Ben Reilly agreed to his plan, as Otto agreed to resurrect him.

Jennix was the ultimate proof this plan worked, as he was the one to consume him. Peter Parker from Earth-1048 arrived at the scene to contest Otto about this, but they were quickly overpowered by the Inheritors as soon as they realized their plan. However, an Enigma Force powered Miles Morales arrived with both Spider-Armies. Earth-616's Peter Parker told them to follow Otto's plan, only for the part to kill Solus. They quickly overpowered the Inheritors after Miles killed him with the Swordvigor and then turned the Inheritors into babies. After the war was ultimately over, both armies dissolved.[8]

Retrieved from "https://marvel.fandom.com/wiki/Superior_Spider-Army_(Earth-928)?oldid=6031163"
Community content is available under CC-BY-SA unless otherwise noted.