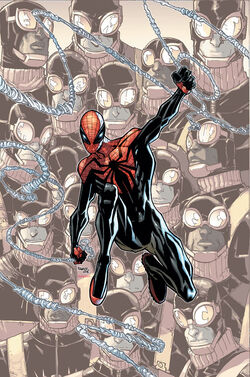 You say you're a hero? Put on this ridiculous costume and go be heroic.

When Otto Octavius took over Peter Parker's body, he decided to take over Peter's role as a superhero. As such, he redesigned the original Spider-Man costume, switching the blue to black and altering the design of the back spider logo, belt, gloves, boots and mask, and a more goggle-like design for the mask lenses.

After the original was ravaged in battling the Spider Slayer,[1] Octavius redesigned the costume again, distancing himself further from Peter's classic design.[2]

Upon the death of Otto Octavius and return of Peter Parker, with the newer suit heavily damaged, this suit was replaced by the more classic uniform once more.[3]

A replica of both the first and second versions of the suit could be seen among the storage of suits, found in Peter's personal lab at Parker Industries.[4] Later, Peter donned a further upgraded version of this suit to use in his vendetta against Itsy Bitsy.[5] The duplicate of Doctor Octopus would later create a replica of the second version of the suit, reclaiming his alias as the Superior Spider-Man.[6] When the duplicate returned to being Doctor Octopus, he got rid of his heroic attire, tossing it in a trash can.[7]

The second version of the suit included the same features as the previous model, with the additions/upgrades of:

In order to convey his more aggressive mindset towards Itsy Bitsy, Peter further upgraded the version of this costume that he had in his possession and decided to use it to kill her once and for all. He also changed the lenses back to white, and added back the red gloves and boots motif of his usual outfit.[5] The suit has an alternative name of "Heavy Assault costume".[15] Noticeable upgrades included:

Like this? Let us know!
Retrieved from "https://marvel.fandom.com/wiki/Superior_Spider-Man%27s_Suit?oldid=6432006"
Community content is available under CC-BY-SA unless otherwise noted.