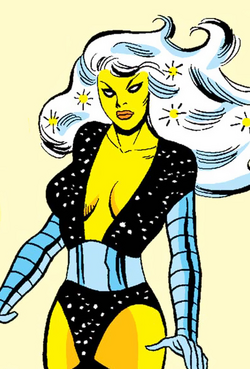 Supernalia was the wife of Nebulon who was shamed by the actions of her husband who chose exile rather than a honorable death, something which an Ul'lula'n had not done in 500 years. To end the disgrace to her and their children she went to Earth and via her psionic abilities enhanced by mind control technology, she manipulated the Defenders into battling the Avengers who had provided sanctuary to her husband. Upon discovery, she felt shame at her actions and when her husband was being killed by the energy draining beam of his Ennu device prevented the Beast from interfering and joined him thereby restoring their family's honor.[1]

Like this? Let us know!
Retrieved from "https://marvel.fandom.com/wiki/Supernalia_(Earth-616)?oldid=5291880"
Community content is available under CC-BY-SA unless otherwise noted.