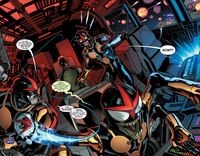 Allies
Guardians of the Galaxy

And then the Nova Corps took your hack of the Nova Force and turned into something that helped the universe.

According to Adomox, a member of the Nova Corps who wanted more power for himself, he used a technology to illegally hack into the Nova Force to gain access to the full power possible from his gang's helmets in order to augment his own strength for personal glory and gain. Jesse Alexander was sent by the Nova Corps undercover and won Adomox's trust by pretending to kill another Nova, which led to Adomox being arrested after many years of operating undercover. Adomox was later stripped of his ranks, and the Corps used his hack to create the Supernovas, a black ops unit within the Nova Corps that included Jesse.[2]

Retrieved from "https://marvel.fandom.com/wiki/Supernovas_(Earth-616)?oldid=5551544"
Community content is available under CC-BY-SA unless otherwise noted.