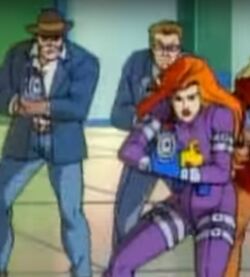 Supreme Headquarters, International Espionage, Law-Enforcement Division, or S.H.I.E.L.D. for short, is a large military organization whose headquarters is on a flying base over New York City. S.H.I.E.L.D. is lead by Colonel Nick Fury. S.H.I.E.L.D.'s purpose is to maintain security in the world. It belongs to every country, and no country at the same time. Its existence is extremely top secret; not even the CIA and FBI know of its existence.

In its first appearance, the escaped criminal, the Chameleon, was trying to assassinate two world leaders at J. Jonah Jameson’s party. Colonel Fury warned Jameson of the danger and gave him a pin that could summon S.H.I.E.L.D. agents. S.H.I.E.L.D. ended up working with Spider-Man and they catch Chameleon.[1]

It later took the Chameleon into custody and brought him onto the Helicarrier. Kingpin later revealed that he had been monitoring Chameleon during his imprisonment. Kingpin launched an attack on S.H.I.E.L.D. to abduct John Hardesky, an infamous cat burglar and father of Felicia Hardy. Kingpin needs him so that he can obtain the knowledge Hardesky possessed on the Super-Soldier Serum.[2]

Spider-Man was also dealing with S.H.I.E.L.D. at the time, looking for files on John Hardesky to help Felicia find her father. Spidey and Black Cat rescue John Hardesky from Kingpin’s clutches. Spidey then takes Hardesky back to S.H.I.E.L.D. where they take him back into their custody. Nick Fury was then shown to appreciate Spider-Man’s work as a hero.[3]

S.H.I.E.L.D. made their final appearance in Spider-Man in the Six Forgotten Warriors saga. The Destroyer was working with them to prevent Kingpin and Red Skull from accessing a doomsday weapon. They also worked to stop Electro’s mad rampage through New York. Electro brought S.H.I.E.L.D. to their knees, destroying the Helicarrier.[4]

Like this? Let us know!
Retrieved from "https://marvel.fandom.com/wiki/Supreme_Headquarters_International_Espionage_Law-Enforcement_Division_(Earth-92131)?oldid=6425640"
Community content is available under CC-BY-SA unless otherwise noted.