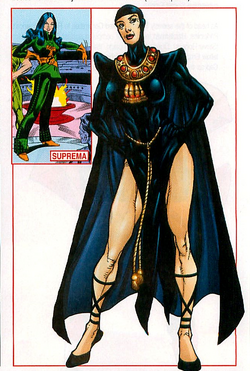 Susan Scarbo, along with her brother Melvin Scarbo, was a stage hypnotist who turned to crime under the name Suprema. Using their hypnotic ability, they began to recruit an army. Scarbo began taking over criminal gangs in New York by subverting their leaders' minds.

Once this was accomplished, she attempted to take over the international espionage agency S.H.I.E.L.D., but her plans were thwarted by Captain America.[1]

The Scarbos were agents of the Exiles, allies of the Red Skull who awaited his return to the modern era. When the Red Skull conceived an heir, but disappointingly had a daughter instead of a son, he was prepared to hurl the infant to her death before Scarbo stepped in. She convinced the Skull to let her raise his daughter to the same depths of hatred as him, and the Skull ultimately relented. Scarbo served as nanny and educator to his daughter, named Sinthea.[2]

Scarbo raised Sinthea as Sin, leader of the Sisters of Sin. Scarbo resurfaced with the Sisters of Sin running the so-called Camps of Hate-camps set up to recruit disaffected teenagers and subvert them to her will. This plan was opposed again by Captain America, who had been temporarily reverted to his teenage self by his fellow Avenger Sersi. He managed to overcome Mother Night's forces and apprehend her and her brother.[3]

Soon after, Mother Night resurfaced as an operative of the Red Skull and a member of his henchmen the Skeleton Crew. When they thought their employer was being held captive in the Hellfire Club, she and the others clashed with both the Hellfire Club's Black Queen Selene, as well as Captain America and his ally Diamondback. Mother Night used her mesmerism powers to allow the Crew to escape.[4]

Mother Night subsequently attempted to take hypnotic control of the Avengers' support staff and use them as spies. This scheme was defeated by the Avengers themselves.[5]

When Crossbones left the Skeleton Crew on a private mission, the Mother Night hired Taskmaster to train Cutthroat to be his replacement in hopes of winning the affection of the Red Skull.[6]

The Skull had no interest in her, and Mother Night began an affair with Cutthroat instead. It ended when Cutthroat tried to kill Crossbones for an incident years prior, and Crossbones killed him instead.[7]

Mother Night took part in a plot by the Red Skull to reactivate a Cosmic Cube by using death and destruction as energy. Mother Night became field leader of a cell in London set to detonate a fire-bomb. Before she could do so, she was killed by the Winter Soldier.[8]

Mother Night possessed powerful hypnotic ability, which included illusion-casting and the ability to make herself and others invisible, the ability to disguise herself as other people, and to force others to obey her will. Her illusions were convincing enough to make someone believe they were on fire when they were actually not. Her hypnosis, however, was not powerful enough to work on those with powerful telepathic abilities, like Selene.

Mother Night was trained in karate, making her a competent hand-to-hand combatant.

Mother Night possessed the normal human strength of a woman of her age, height, and build who engages in an intensive regular exercise.

Mother Night utilized certain devices hidden in her jewelry, including a necklace designed by the Tinkerer that releases a gas that helps her subvert others' wills, and can project "dark light" to camouflage herself in shadows, or to temporarily blind an opponent.

Like this? Let us know!
Retrieved from "https://marvel.fandom.com/wiki/Susan_Scarbo_(Earth-616)?oldid=6494914"
Community content is available under CC-BY-SA unless otherwise noted.