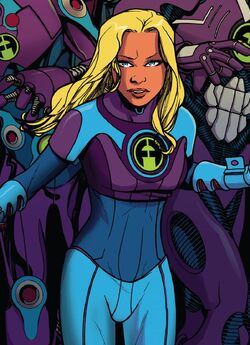 I love you, you love me... Benjamin, will you marry me?

The oldest child of renowned scientist Dr. Franklin Storm, Sue Storm inherited her father's genius. From early childhood, she was one of the prodigies studying and working at the Baxter Building, a midtown Manhattan government research lab. Following her father into physics, at age eight she built a sugar-powered rocket and accidentally destroyed her father's car, after which she changed her focus to "inner space" biology. Romancing brilliant Baxter Building classmate Reed Richards, Sue became a formidable scientist in her own right, earning four doctorates in bio-chemical sciences. Her brother Johnny also spent his formative years at the Baxter Building labs, but he rebelliously resisted taking advantage of this opportunity to learn.

Attending the Nevada desert testing of Reed's N-Zone dimensional teleporter, Sue was transported a mere three miles into the desert by the device's malfunction. She was retrieved by former Baxter Building instructor Dr. Arthur Molekevic, who took her to his underground facilities below Manhattan, calmed her, and helped her gain control of her new abilities, while he sent a "monster" to the Baxter Building to retrieve three others (Reed, Johnny, and Ben Grimm) who had also been transformed by the N-Zone experiment. In the company of those three, Susan fled Molekevic and used her invisible protective force field to take them all back to the surface.

Making the study of herself and her three partners her new life's work, Sue spent months investigating their abilities and charting their powers while improving her own understanding of herself. She deduced the nature of both Reed and Johnny's changes, though her own powers remain unexplained and she was unable to penetrate Ben's skin with any more detail than determining his internal fluid pressure. She continued to develop her force fields, though there were physical side effects to extreme usage. When Victor van Damme attacked the Baxter Building with a squad of flying insects, Susan contained and compacted a squad of them within a force field, developing a nosebleed in doing so, and later caught a crashing helicopter in her force field, suffering severe physical stress as a consequence.

Susan proved herself capable of standing on her own, and after the team went public she assumed the codename "Invisible Woman." Her force fields became the Fantastic Four's ace in the hole, saving their lives when Nihil dumped Reed and Ben into the near-vacuum of the N-Zone and single-handedly stopping the time-traveling Chrono-Bandits. She co-created chrono-tunnels with Reed Richards, and conducted biological studies on the Kree alien Mahr Vehl and extra-dimensional life in the N-Zone. Though her new found fame brought her unsought attention from the likes of billionaire playboy Tony Stark, she remained romantically attached to Reed Richards, despite her concerns about his over-devotion to science.

Reed Richards proposed marriage to Sue only a few moments before to the Ultimatum Wave hit. Susan used her force fields to tried to prevent the tsunami from engulfing New York City, causing herself to fall into a coma. She was tended in the Baxter Building, where Ben Grimm and her mother Mary Storm watched over her. Susan recovered from her coma thanks to the efforts of Grimm and Dr. Molekevic, and learned that she had nanites inside her due to Reed. Theorizing that Reed had implanted everyone in the Fantastic Four with nanites, Susan and her friends attempted to find Johnny, who was missing after the Ultimatum Wave, through the nanites. After tracking her brother's position, Susan and Ben traveled to where he was and found him imprisoned by the demon Dormammu, who killed Dr. Strange. The three managed to defeat the demon thanks to the combined powers of Susan and Johnny, turning Dormammu into a human being.[11]

Sue's father was killed in the wave. Following his funeral, Susan rejected Reed's proposal and left the Fantastic Four, but continued to work at the Baxter Building.[11]

Ben came to Sue and professed his love for her. Ben was hurt that she didn't return the sentiment. Moments later, a gelatinous creature attacked her.[7] Ben and Sue managed to fight off the creature long enough for it to successfully complete the destruction of the Baxter Building and self-destruct itself. They joined Johnny at Reed Richards' home, only to learn of Reed and his family's death.[6] Sue and Nova (Rick Jones) discovered that Reed Richards was still alive and behind the attacks. Sue, angered over the attacks and his faked death, attempted to kill Reed, but he was able to neutralize her and subjected her to extreme pain. Nova managed to teleport them both to the Triskelion, where she was taken into medical care.[12] Sue barely survived and, in a weakened state, attempted to locate Reed to bring the fight to him. The gathered heroes located Reed in the Negative Zone and confronted him with an all-out assault.

They bested him and his alien creatures with little effort. Johnny deformed Reed's face with the hottest flame attack he had ever produced in revenge for hurting his sister. Nova and Spider-Man managed to steal the technology that Reed was using to create his new facility and jump between universes, causing the entire facility to collapse. Reed was flung from the facility, causing him to drift aimlessly in the Negative Zone.

Sue approached Ben and professed her love for him, as he had done for her before the attacks started. She proposed to him, stating that every good moment she ever had was because he was near her. Ben accepted.[13] Sue and Ben attended Peter Parker's surprise birthday party together.[14]

Sue Storm later helped the Ultimates in battling against the Maker and his Children, soon discovering that he was indeed Reed Richards, her former lover. She managed to aid the Ultimates in stopping him and placing the megalomaniac in apparent S.H.I.E.L.D. custody. Sue also helped thwart off Hydra's forces in the Battle of Wyoming. In the aftermath of the battle, Sue encountered Thor to speak with him. She researched more about the Infinity Gems and has proposed that a search be initiated in order to prevent them from falling into "unfortunate" hands.

During a meeting, in which Invisible Woman informed S.H.I.E.L.D. about the Infinity Gems she had been gathering along Thor, the mysterious Kang freed both Hulk and Reed Richards from the Triskelion, stole the Gems and formed along them and Quicksilver the Dark Ultimates. The Ultimates barely escaped, but Captain America decided to be left behind in order to stop the villains, although he was defeated.[15]

Sue Storm assaulted Reed's base, the Aleph-One, with the help of The Thing.[16] Richards was seemingly defeated by the duo, but he was revealed to be a replica made out of a segment of Reed's body. Sue and Ben were attacked by Quicksilver, who severely injured Sue and apparently killed Ben.[17]

Both were healed by Richards, and rescued by Tony Stark in order to confront the villain along with the Ultimates. But the Maker's cavalry arrived in the form of Kang wielding the final gem, who also revealed herself as being the Sue Storm from a near future.[18]

During a furious battle against Reed Richards and his Ultimates, Iron Man managed to acquire the Infinity Gems and depower The Maker. Tony first used the gems to revive his corpse and transfer his consciousness back to his body. When he was about to face Richards, an immense flux of energy echoed through time and space and the Gems were destroyed. Kang stated that what she tried to prevent what just happened, and she left stating she would try to go back further in time.

Later, Sue visited Reed at the Cube, and told him that a powerful being known as Galactus brought to this universe by the flux had started approaching Earth, sending a message which read "Hunger".[19] The Ultimates faced Galactus with the loss of Captain America and Thor, but managed to defeat the cosmic entity and exile it to the Negative Zone, saving Earth.[20]

Inspired by the concept of the Fantastic Four, Sue decided to create a team of geniuses with the purpose to help the Earth, with the help of Iron Man, she founded the Future Foundation.[21]

After some incidents in which rips in the time-space continuum brought inhabitants from other universes,[22] the Future Foundation was visited by the inhabitant of a universe who had escaped before its destruction, Miles Morhames, Spider-Ham,[23] who revealed them that for their universe to survive, Sue Storm had to have a child with Reed Richards.[9] Sue visited Reed in order to comply with Spider-Ham's suggestion, but he convinced her to find another way. They stole genetic material from a S.H.I.E.L.D. lab, and Reed created a child Sue with the child of Ben Grimm. Months later, the rips appeared more often, and Sue entered in labor. At that time, a rip brought evil cyclops versions of heroes from another universe, who began to rampage through New York, but when the baby was finally delivered, the girl created an energy emanation which closed the portal and pulled back those who came from it, fixing the decaying universe.[24]

Sue was a child prodigy and scientific genius, possessing four doctorates in the biochemical sciences before she was in her twenties,[25] including biotechnology and biophysics.[10] She had an IQ of 170.[21]

Like this? Let us know!
Retrieved from "https://marvel.fandom.com/wiki/Susan_Storm_(Earth-1610)?oldid=6438752"
Community content is available under CC-BY-SA unless otherwise noted.